Bill McCue made his operatic debut with Scottish Opera in Glasgow in 1962, the year the company was founded. He was the only principle singer to perform in every season and was awarded a silver Quaich from the company in 1992, marking a 30 year connection with them. He continued a strong association until the year before his death, when he performed in Janecek’s The Cunning Little Vixen. With Scottish Opera he sung over 60 roles, including many of the key bass roles in the operatic repertory: Bartolo, in The Marriage of Figaro, Hunding in Die Walkure, King Dodon in The Golden Cockerel, Peacham in The Beggars’ Opera, Rocco in Fidelio, Kecal in The Bartered Bride, Dulcamara in The Elixir of Love, Sacristan in Tosca, and Sparafucile in Rigoletto. 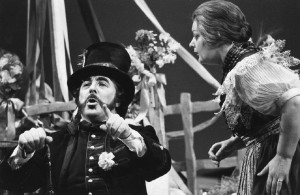 Additional operatic performances included The Marriage of Figaro at the Edinburgh International Festival with Daniel Barenboim and a tour to Russia with Benjamin Britten and the English Opera Group in 1964. Bill made his debut at the Royal Opera House in 1965.

r of songs from the shows, Peter Ebert at Scottish Opera produced Fiddler on the Roof with Bill in the role of Tevye. This production was a huge success and in 198­­6 Bill staged the show again with his own company, The Scottish Singers’ Company.