Bill McCue was born in the mining village of Allanton, Scotland, in August 1934. His family had a strong musical tradition, so it was natural for Bill to follow their example.

In 1947 he won his first award from the Burns Federation Scottish Schools singing competition. On leaving school he started work as an apprentice electrician with the National Coal Board at Kingshill No 1 colliery, Allanton. He joined The Shotts Musical Association and the Male Voice Choir, where he got his first experience as a solo singer. With the help of a Coal Board Scholarship, he left his trade to enrol as a full time student at the Royal Scottish Academy of Music and Drama in 1955. His studies were interrupted by national service, which he served in the Royal Air Force, but he was able to continue his studies firstly at The Royal Northern College of Music in Manchester and finally at the Royal Academy of Music in London. In 1960 he gained his L.R.A.M performers diploma, and an award in The Kathleen Ferrier Memorial Scholarships. He studied with Marjorie Blakeston, Heddle Nash and Roy Henderson. He began his Professional Career in 1961.

‘It’s a Fine Thing To Sing’ was the title of Bill’s first series for BBC Radio. It started in 1962 and was so successful that it ran until 1970. It was heard throughout Britain, and on the BBC World Service. The vast repertoire and range of songs gave him an opportunity that falls to very few artists. His radio career continued almost nonstop with shows like ‘So Who Disnae Like Opera’ for Radio Clyde, ‘Music from Scotland’ for BBC World Service, and the popular ‘McCue’s Music’. ‘McCue’s Music’ was also the title of his first Television Series for Grampian Television which ran for five years. You can find out more about Bill’s television and radio career here.

For BBC TV he performed a wide range 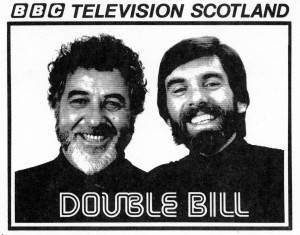 of programmes, including interviews for the arts programme ‘Spectrum’, presenter of ‘Fanfare’ – a series for Brass Bands, and host on many New Year Shows. He also co-hosted ‘Double Bill’ with Bill Torrance for BBC, and appeared regularly for Scottish Television.

Bill McCue made his operatic debut with Scottish Opera in Glasgow in 1962, and performed in every season, the only singer to do so. He sang over 60 roles.

In 1964 he toured in Russia with Benjamin Britten and The English Opera Group, and made his debut at The Royal Opera House in 1965. For more information on Bill’s operatic career, see our opera section.

In concert he was in constant demand, not only at home, but abroad. His concert tours took him worldwide, to countries including the United States and Canada, Denmark, France, Holland, Germany, Italy, Iceland and Russia.

He was a regular guest artist with 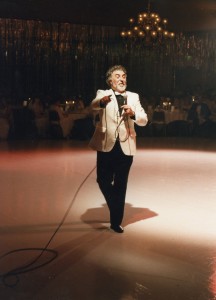 The Scottish National Orchestra, especially at The Proms, and appeared at The Henry Wood Proms at The Royal Albert Hall in London.

He was an ideal guest for choirs and brass bands not only because of his versatility, but his genuine warmth and friendly personality. He performed special programmes of Scottish Song and Verse, ranging from the early Court Period to the present day. He also started ‘Bill McCue and Friends’, an evening to suit all musical tastes, where he shared the programme with new talent, in search of the most elusive commodity, experience.

He also had a very successful production of ‘Fiddler on the Roof’ with his own company, The Scottish Singer’s Company, and they also produced ‘The Edinburgh Edition’, (a programme at the Edinburgh Festival, celebrating the 200th anniversary of the Robert Burns’ visit to Edinburgh). Another addition to his repertoire was a programme called ‘Ol’ Man River’, a tribute in song to Paul Robeson.

Bill McCue has recorded for all the major labels. Scots Songs for CBS, RCA, and World Record Club. Spirituals for DECCA, and Victorian Ballads for LISMORE. His recordings on the SCOTDISC label include ‘Count your Blessings’ (Inspirational Songs), and ‘Lucky White Heather’ (trad. Scots songs). Operatic recordings include EMI classics Mozart Le Nozze Di Figaro with the English Chamber Orchestra and Daniel Barenboim. Bill’s recording of Schubert’s Mass in E Flat D950 with the Philharmonia Orchestra, conducted by Carlo Maria Giulini, is available on BBC Legends.

Hugh McDiarmid writing on BBC TV and Radio Programmes (Radio Times)
“The deep dark voice of singer Bill McCue is familiar nationwide through his performances with Scottish Opera and his many television and stage appearances. But perhaps not so well known is that he came to music the hard way, as a mature student through a scholarship. This makes him a more vivid and many faced character, than the one dimensional persons normally associated with the Arts.”

L’ARENA Verona Italy
“Bill McCue presents an imposing and impressive figure in his Kilt, his voice has all the character of that other prestigious Scottish export Whisky, Strong, Pure, Matured with Love and Care over many years.”

MAARIV Irith Rottem Israel
“After last night’s concert a new name must be added to the list of great Tevyes from Fiddler. No he is not Israeli but a Scotsman called Bill McCue. Those who saw and heard him found a strong resemblance to Shmuel Rudensky.”

Time Magazine Carnegie Hall New York
“McCue has the appearance of MacBeth, tall, dark, broad and bearded. His singing of Scots songs was so interesting that I (who would not know what a Wee Hoose was even if I fell over one) was captivated.”

Records and Recordings
“He is possessed of a strikingly sonorous rich bass voice, impeccable diction, and a keen but not overbearing appreciation of the words.”

The Gramophone
“Some singers never make bad records, Bill McCue is fortunate to be included in that category. His voice is rich and pleasant, and it will be a long time till you hear Scots songs so well sung.”

The Glasgow Herald
“Scotland has probably never produced a singer with such a wide range in voice repertoire, and personality as Bill McCue. His record over the last twenty years proves that.”

The Scotsman
“McCue is possibly the most versatile Scottish singer of the past decade. He has a true bass voice, of power and flexibility, and a keen sense of performance.”